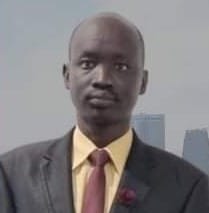 Mr. Deng Bul is co-founder of the Integrated Help and Opportunities for Peaceful Existence-iHOPE Inc. At age 9, Mr. Deng along with other children, fled what was then Sudan and trekked to the Ethiopian border town of Pinyudo where they settled as a refugees in 1987.

He attended primary school to grade four, but then fled Ethiopia due to another civil war and trekked back to Sudan, where he spent a few months at Pochalla before the town fell to the Sudanese army. As civil war was intensifying in Sudan, Deng moved across the border and later settled as a refugee in North Eastern Kenya, at Kakuma refugees camp. After spending a year and half at Kakuma, Deng returned to Sudan and joined Sudan People’s Liberation Army (SPLA).  He was there trained as a Medical Officer and Laboratory Assistant and would find time to help displaced people in those capacities. He intermittently worked for ICRC and Medair between 1997 and 2000.

At the end of 2000, Deng returned to Kenya to finish his primary and secondary education being sponsored by his great friend Ms Doris Lempenauer. He migrated to Australia in 2004 and settled in Queensland before moving to Victoria. Deng attended university and graduated with bachelor degree and graduate certificate in Biotechnology. He is now completing master degrees in Medical Microbiology and health research at RMIT and Charles Darwin universities respectively.

Deng is now living in Darwin in the Northern Territory with his family where he and his wife are working hard to turn their lives around. Deng is passionate about working with disadvantage people from all walks of life. He is appalled by the  carnages currently taking place in South Sudan. He believes that Education can change South Sudanese attitudes to wars. Deng strongly believes that illiteracy plays a major negative role in South Sudan civil wars. He also believes in community empowerment, which he thinks shall come through education. Deng believes that in community empowerment comes self-reliance, peace and peaceful coexistence.